Forums Home › General Community › Titanfall 2 Fan Creations
Welcome to the Titanfall 2 Forums. We have made a few adjustments to help eliminate spam and fake accounts. Starting today to participate in discussions, you must own Titanfall 2 and have a linked EA account. If you're having issues posting but do own the game, log out completely and clear your browser cache, cookies, and temp files, then restart the browser.

Some Ideas for Titanfall 2

Alternator - Either reduce accuracy or damage.

Holopilot - Animate it so it looks as if it's aiming and shooting at the closest enemy, increasing its bamboozling effectiveness.

Surge - An electrical based titan which fries and disrupts opponents, leaving them vulnerable to other titans!
Gamemode:

Chaotic Titan Brawl - A titan-only gamemode similar to Titan Brawl, but everyone's titan has all of their titan-specific kits enabled.

Randomizer - A game of attrition but after every death, you are equipped with a new loadout you can't change. Titans are also randomly selected and randomly kitted.

Got any other ideas? leave a comment below!
Let the flames cleanse thee... 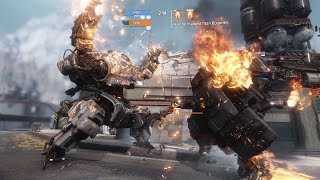